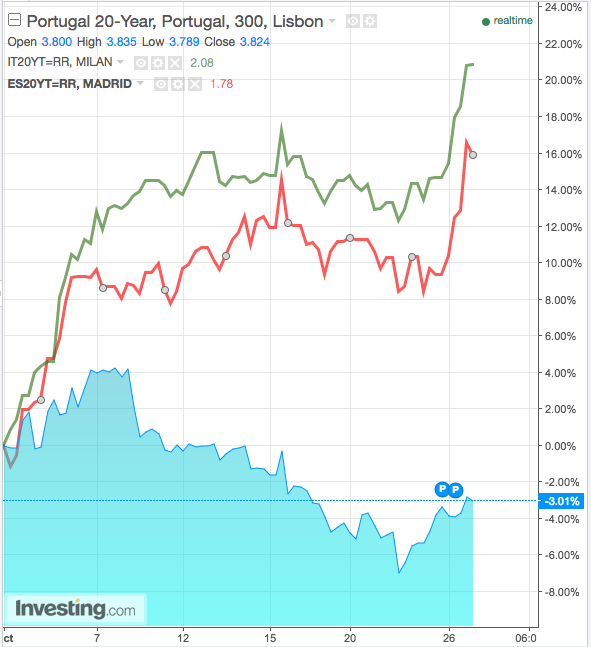 Strong growth data in Britain prompted a sell off in the world's largest benchmark bonds on Thursday, with investors believing the Bank of England is now less likely to cut rates at policy meeting next week.

At a time when the market is worried that central banks are stepping back from the ultra-accommodative stance of recent years, a reduced chance of a rate cut was enough to push benchmark bonds in Europe and U.S. to their highest level since the Brexit vote in late June.

"The stronger GDP print in the UK has given further weight to speculation that the BoE will not provide further stimulus anytime soon," said Rabobank strategist Richard McGuire.

"The market reaction to strong data prints has become more dramatic in the wake of speculation that central banks' modus operandi is changing and they are more focused on the negative effects of unconventional stimulus measures than the benefits," he said.

British gross domestic product expanded by 0.5 percent in the July-September period, less rapid than the unusually strong growth of 0.7 percent seen in the second quarter but comfortably above a median forecast of 0.3 percent in a Reuters poll of economists.

The news prompted Britain's 10-year bond yield to rise 7 bps to 1.23 percent GB10YT=RR, the highest since the country voted to leave the European Union in June. German DE10YT=TWEB and U.S. equivalents US10YT=RR rose to their highest since early June at 0.15 percent and 1.83 percent, respectively.

Concerns over reduced stimulus have increased in recent times, ever since the Bank of Japan on Sept. 21 changed its focus from money printing to targeted government bond yields.

Rumours that the European Central Bank may reduce the scale of its asset purchase programme exacerbated the concerns, and 10-year German Bund yields, the region's benchmark, are now 31 basis points higher than the September trough of minus 0.16 percent.

Spain's borrowing costs struck a three-month high on Thursday ahead of a vote on acting Prime Minister Mariano Rajoy's bid to form a minority government and end 10 months of political deadlock.

Rajoy is expected to win the vote in two rounds, and analysts said some investors had already decided to sell Spanish bonds which they say are pricing in a high chance of success.

Rajoy has offered to work with his opponents on major challenges such as pension and education reforms, but is unlikely to get the backing on Thursday from the absolute majority of deputies that he requires.

If he fails, a second vote will be called 48 hours later in which he simply needs more votes in favour than against, meaning that a recent decision by opposition Socialists to abstain should allow for a breakthrough.

Rajoy's conservative People's Party (PP) won two elections in December and June but failed to secure a majority and attempts to put together a coalition have failed.

"Some investors are basically thinking that a government being in place has largely been priced in over the last week or so, and under that scenario there is only one way you can go from here if there is a slip back," Credit Agricole strategist Orlando Green said.

Spanish 10-year bond yields rose as much as 7 basis points on Thursday to hit a three-month high of 1.22 percent, one of the worst performing euro zone government bonds in a broad sell-off that gripped debt markets on Thursday.