& I will remove the world 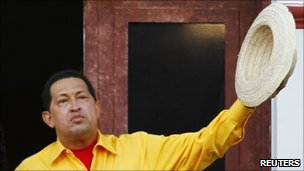 The Venezuelan President, Hugo Chavez, says he wants to open up his socialist political project to the middle classes and private sector.
Mr Chavez said his government had to convince Venezuela's middle classes they were needed.
Speaking by telephone on state television, he said he was entering a more reflective period of his life.
Mr Chavez recently underwent cancer treatment in Cuba, but plans to stand for re-election next year.
The Venezuelan leader made his comments a day after he celebrated his 57th birthday, when - appearing in yellow rather than his characteristic red shirt - he told a rally of cheering supporters that he was in no mood to leave office in the near future.
In Friday's telephone interview, Mr Chavez said the treatment to remove a tumour had led him to radically change his life towards a "more diverse, more reflective and multi-faceted" period.
He told his supporters to eliminate divisions and dogma, and end what he called the abuse of symbols such as the term "socialist".
"Why do we have to always have to wear a red shirt?" said Mr Chavez. "And the same goes for the word 'socialism'."
The president cited the example of a mayor in the governing party who inaugurated a "Socialist Avenue", which Mr Chavez described as "stupid".
"We need to reflect and introduce changes in our discourse and in our actions."
Cuban lessons Mr Chavez, who came to power in 1999, said the private sector and the middle classes were "vital" to his political project.
He said it was a shame that attempts to be more inclusive of these groups in society had been criticised by some in official circles in Venezuela.
"Raul Castro is leading a process of self-criticism," said Mr Chavez, hinting that Venezuela could learn from the reforms being undertaken by the president of Cuba, who has made some concessions to the private sector since taking over from Fidel Castro in 2006.
Mr Chavez said his government needed to correct the perception that small businesses would be taken over by the state.
"We have to make sure no-one believes that," he said. "We have to convince them about our real project, that we need this sector and that we want to acknowledge their contribution."

NEW YORK — US ratings agency Standard & Poor's has downgraded foreign and local currency sovereign ratings of Venezuela Friday, due to the country's political risk.
S&P cut the Venezuela ratings from BB- to B+ with a stable outlook. It said that the decision "reflects our recently revised sovereign rating methodology's heavier weight on political risk, which is a credit weakness for Venezuela."

S&P also states that its decision also took into account the the Chavez government's intervention in the investment and growth policies as well as Venezuela's modest fiscal and external positions.

Chavez has recently returned to Venezuela from Cuba after undergoing chemotherapy and plans to run for a third presidential term.

Venezuela's proven oil reserves are among the highest in the world but production has been faltering in recent years.

Users Who Are Viewing This Discussione (Users: 3, Guests: 26)