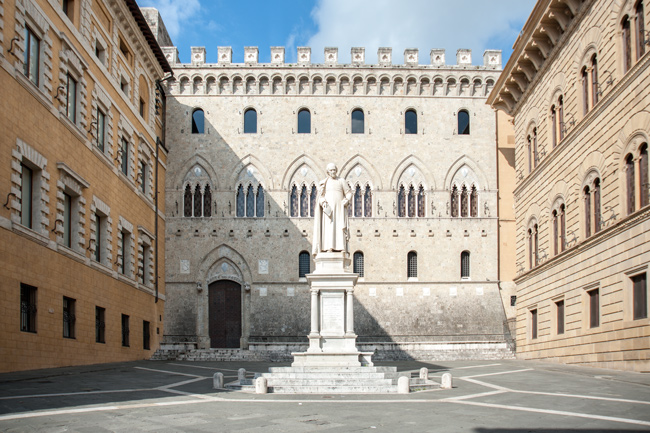 MPS (BMPS.MI) aims to launch the new share issue for up to 2.5 billion euro ($2.5 billion) on Oct. 17. That would allow it to raise funds in time to lay off staff under early retirement rules expiring at the end of November - barring new legislation to extend them.

To meet its deadline MPS must approve the terms of the share issue at the very latest by the middle of next week, two people said.

And before that it needs to secure the support of the eight banks that have made a preliminary commitment to mop up unsold shares.

With markets gripped by fears about recession, inflation and war, the banks see the deal as too risky to undertake without a pre-commitment from cornerstone investors.

So far however, only French insurer Axa (CS.EQ), which sells its products in Italy through MPS branches, has offered to provide support.

Lovaglio has failed to take up a similar offer by another MPS commercial partner, Anima Holding (ANIM.MI), because unlike Axa the Italian asset manager has also sought a strengthening of the distribution agreement as part of the deal.

The lenders had expected Lovaglio to have by now obtained commitments in writing from cornerstone investors, two people close to the transaction said.

The diverging views between the consortium and the CEO on how to proceed means it won't be clear until the start of next week whether the capital increase will take place as planned.

The lenders, which are led by Bank of America, Citi, Credit Suisse and Mediobanca, can walk away thanks to a clause that subjects the underwriting to positive investor feedback.

With MPS' market value equivalent to less than a tenth of the amount the state-owned bank is looking to raise, the banks are exposed to potential losses on the shares left on their books, which will initially value the Tuscan bank above healthier peers.

Under European Union state aid rules, the state can cover 64% of MPS' capital raising, based on its stake in the bank resulting from a 2017 bailout.

The remaining 36% must come from private hands.

Anima and Axa could jointly provide at best only up to 300 million euros, sources have said, adding the consortium had hoped to have formal pre-commitments also from other investors sounded out by Lovaglio, such as holders of the bank's junior debt.

The risk of a conversion into equity has pushed the price of MPS' junior bonds close to half of their nominal value.

Users Who Are Viewing This Discussione (Users: 6, Guests: 19)