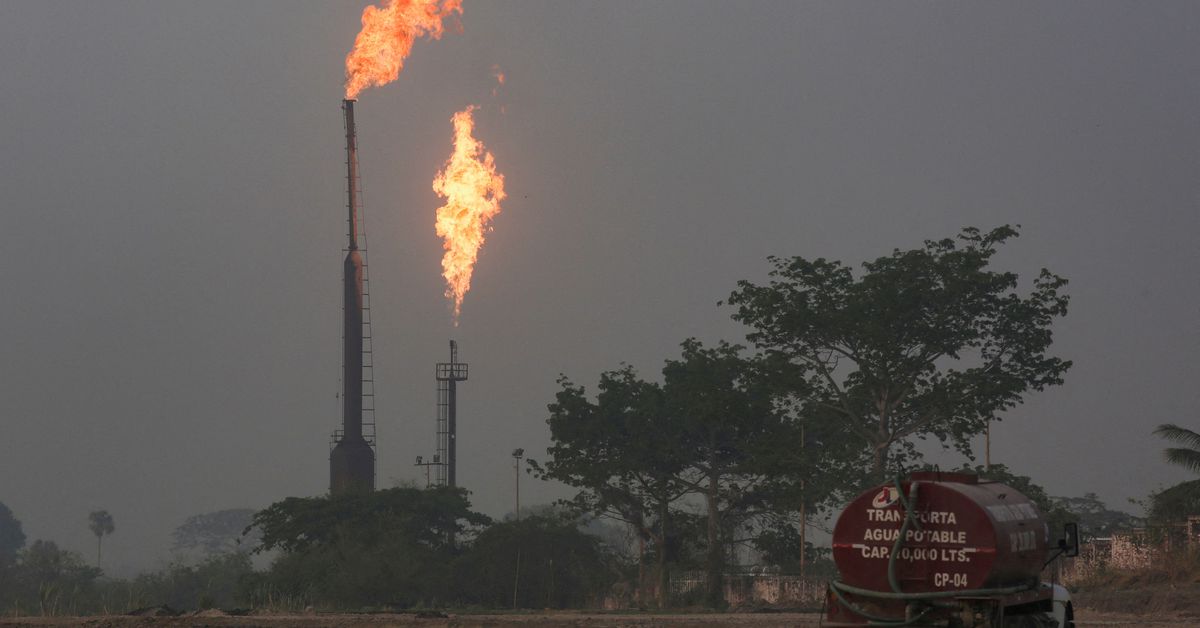 Mexican state oil company Pemex illegally burnt off hydrocarbon resources worth more than $342 million in the three years up to August 2022 at two of its most important new fields, internal documents from the country's oil regulator showed.

Mexican state oil company Pemex illegally burnt off hydrocarbon resources worth more than $342 million in the three years up to August 2022 at two of its most important new fields, internal documents from the country's oil regulator showed.


Bonds from Petroleos Mexicanos were whipsawed this week as investors questioned how the company will pay off billions of dollars of debt amortizations due in the next few months.

President Andres Manuel Lopez Obrador said Friday that the government could potentially assume some of Pemex’s obligations or cut the company’s taxes. Even though a proper debt transfer would likely require a constitutional change, his words brought relief to investors, who’d been spooked earlier in the week by reports of the oil giant’s plans to sell at least $2 billion in bonds.

Pemex is facing a steep amortization schedule this year just as crude production hit a record low at 1.623 million barrels a day in 2022, according to National Hydrocarbons Commission data. But support from Lopez Obrador, or AMLO, as the president is known, has made the company’s bonds a favorite among emerging-market investors, who argue that they pay a hefty premium over their sovereign counterparts for essentially the same risk.

“The market has long (and correctly) viewed Pemex debt as implicitly guaranteed by the United Mexican States,” veteran sovereign debt lawyer Lee Buchheit wrote in an email. “It sounds as though AMLO wants to make that official by exchanging Pemex debt for UMS paper.”

To do that, AMLO may need to change the constitution, said David Enriquez, a partner at Goodrich Riquelme y Asociados law firm. That may prove difficult as his Morena party doesn’t have the two-thirds majority in congress it would need to pass such reform.

5 Ways to Make Sustainability Work for Your Business

Pemex has the highest debt load among global oil majors at $105 billion. In the event of a transfer, the government may assume only as much of the company’s debt as needed to “remove the shadow of a possible default,” Buchheit added.

Still, if all of it was transferred to the government, it would be about 8% of gross domestic product, Shelly Shetty, a managing director at Fitch Ratings, said at an event in Mexico City.


Even though the oil driller’s debt isn’t explicitly guaranteed by the government, it “doesn’t mean that they can’t find other paths, like securing congressional authorization to raise the debt limit, issuing more debt and paying off Pemex’s debt that way,”said Patrick Esteruelas, the head of research at EMSO Asset Management.


“At the end of the day, where there’s a will to continue supporting Pemex, there’s a way.”

A capital injection from the government could come in tandem with the new offering or liability management deal that’s expected before a company blackout period starts on Feb. 12, Bloomberg reported.

‘Positive Hints’
Money managers have grown accustomed to AMLO’s unscripted morning conferences moving markets. He’s used them to announce his central bank chief nominee and his intentions to use special drawing rights from the International Monetary Fund to buy back Pemex debt. He even blurted out an interest-rate decision before it was officially announced by policy makers last year.

Bonds from the company due in 2050 rose as much as 3.4 cents to 77.5 cents on the dollar Friday following AMLO’s comments, according to Trace data, even as traders await further clarification from the finance ministry.

The cost to insure Pemex’s debt against default over the next five years dropped 14 basis points this week to the lowest since June.


About $5 billion would be needed between a new issue and a capital injection to provide some comfort to the market, said Declan Hanlon, chief emerging-market credit strategist at Santander Investment Securities in New York.

“I think of these kind of headlines as positive hints for action and to prepare the market,” he said. “This combines to inform the investor base that there is some news pending.”


*
Peru elections could come as soon as later this year

Pemex's debt obligations are being paid on time with the government's assistance, and the finance ministry and Pemex's leadership are working out the schedule for this year's payments, President Andres Manuel Lopez Obrador said at a news conference.

The government will continue to reduce the tax burden on Pemex, alongside other measures, Lopez Obrador said, noting that the ministry would explain soon how debt payments would be met.

Venezuelan opposition leader expects protection for assets
MADRID - The new president of Venezuela's opposition legislature is confident the United States will back the body by continuing to protect foreign assets like oil refiner Citgo Petroleum from creditors, she said.

Dinorah Figuera, a 61-year-old doctor from the Primero Justicia party, was chosen to lead the opposition's national assembly earlier this month as it prepares to pick a presidential candidate and pushes for renewed talks with the ruling socialists.

Figuera, who lives in exile in Spain, told Reuters in an interview that the assembly's new triumvirate of women leaders will be able to confront President Nicolas Maduro, whom the United States and other countries consider a dictator, and protect assets like Citgo and nearly $2 billion in gold at the Bank of England from creditors.

Peru elections may move up to this year, says president
Peruvian President Dina Boluarte said she was considering moving up general elections to later this year, as the new leader struggles to contain protests demanding her resignation that have left dozens dead.

Congress is set to debate a proposal later on Friday to move national elections forward to April 2024, from 2026, but several legislators have proposed moving up the elections even earlier, to late 2023.

Boluarte became president in December after her predecessor Pedro Castillo attempted to illegally dissolve Congress, after which he was ousted and detained.

New U.S. migrant rules push down traffic in Darien Gap
BRASILIA - The number of people making a perilous crossing on foot of the Darien Gap jungle between Colombia and Panama as they head north for the United States has dropped significantly since the U.S. government tightened rules on migrants, the International Organization for Migration (IOM) said.

Earlier this month Washington expanded COVID-19 pandemic-era restrictions to include migrants from Cuba, Haiti and Nicaragua and not just Venezuelans as people who can be expelled back to Mexico if caught crossing the border into the United States. The restrictions are known as Title 42.

Users Who Are Viewing This Discussione (Users: 0, Guests: 5)