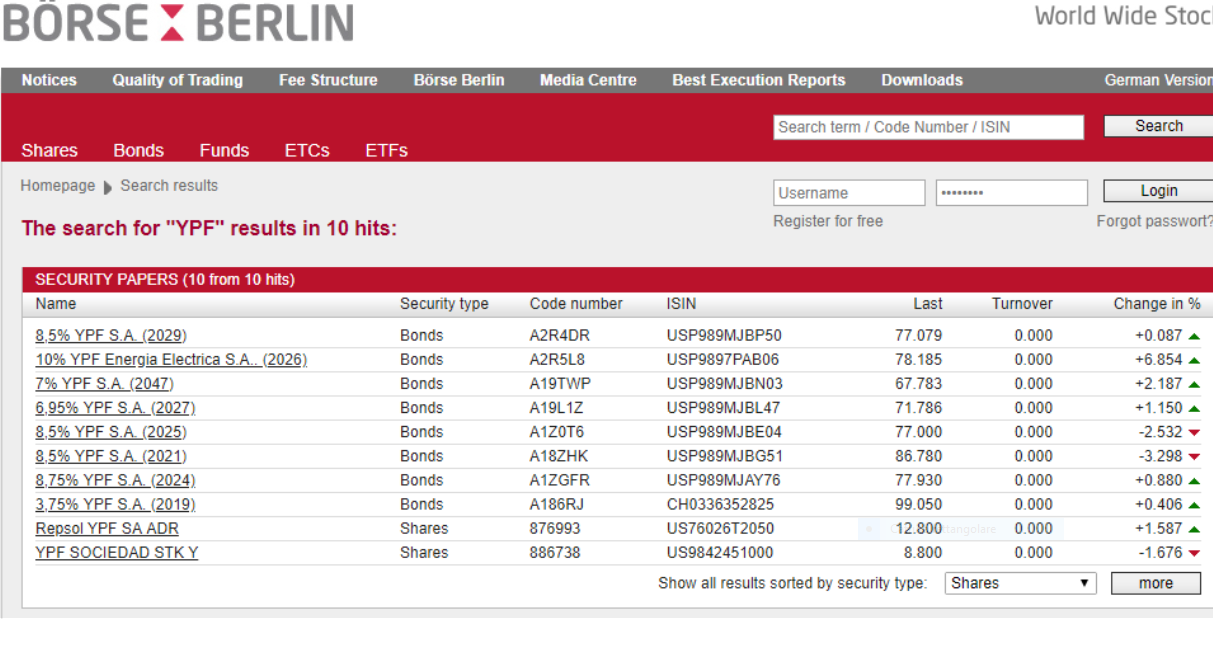 By Aline Oyamada and Sydney Maki

(Bloomberg) --
Less than two years after Argentina made a splash in markets by selling a $2.75 billion, 100-year bond, another debt restructuring is a real possibility after President Mauricio Macri was routed in a primary election.

Money managers and analysts from firms including Citigroup Inc. and Bank of America Corp. say investors are likely to recoup less than 40 cents on the dollar on its notes if Argentina reneges on its debt for the third time in two decades.

Bonds got fairly close to testing those levels last week, when some notes traded as low as 45 cents on concern Alberto Fernandez and his running mate, former President Cristina Fernandez de Kirchner, would undo Macri’s market-friendly agenda. Yields on the shortest-term dollar bonds Argentina has outstanding shot up above 50%. While assets have had a mild rebound since, the implied probability of default over the next five years is at 83%, according to data from CMA. 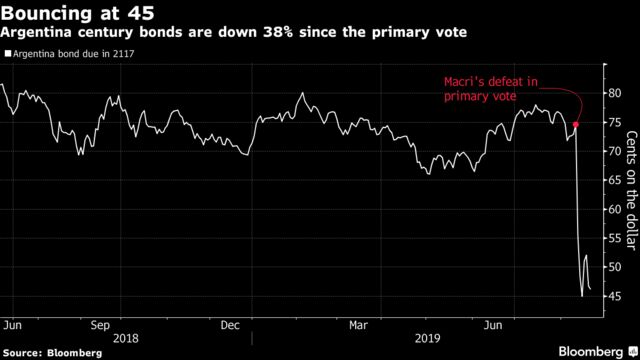 “The probability of a restructuring is high next year given large financial needs, limited market access and fiscal challenges amid a recession,” Claudio Irigoyen, head of Latin America fixed-income and foreign-exchange strategy at Bank of America Merrill Lynch in New York, wrote in a note. “The fiscal and financial situation is vulnerable and the markets show low credibility so far.”

If that happens, a recovery would probably be below 40 cents for dollar-denominated bonds, according to Irigoyen. That is slightly more optimistic than Citigroup, which says bondholders would likely get something in the low 30-cent range in case of non-payment for the sovereign notes. Bonds rose around 1 cent on Wednesday, with the century notes being traded at 49.2 cents on the dollar as of 8:50 a.m. in New York.

“In external debt, we think that more certainty on the plans of the next administration is needed, as the market is not yet pricing a worst-case recovery value,” Citigroup emerging-markets strategists including New York-based Donato Guarino wrote in a note, adding that it may only come “closer to the election.”

There have been some clues on what Fernandez would do if he wins the Oct. 27 vote. In several interviews with local newspapers on Sunday, the front-runner spoke about what he considered successful debt talks during his time as cabinet chief that led to a restructuring of bonds and the need to negotiate with bondholders. While he didn’t say he would necessarily push for a restructuring, he said that “no one knows better than us the damage caused by default.” He also pointed to securities tied to economic growth, which were offered in the 2005 and 2010 restructurings, as one way to invite investors to be “partners in our growth.”

On Monday, his economic adviser Guillermo Nielsen said Fernandez has no plans to restructure the country’s debt.

Read More: Wiped Out Once Again, Argentina Bulls Sift Through the Ashes

Some investors have speculated that Kirchner, Macri’s predecessor who led Argentina through a period of radical policies including capital controls, may be the one to set policy for a Fernandez administration.

The likelihood that Argentina will need to restructure its debt is higher now regardless of who ultimately makes policy decisions after the presidential election, said Alejo Czerwonko, an emerging-markets strategist for the Americas at UBS AG in New York. A scenario in which Kirchner calls the shots on economic policy would be the most damaging to bond investors, followed by an outcome where she and Fernandez clash, resulting in “erratic policy,” he wrote in a note.

Raphael Marechal, an emerging-markets money manager at Nikko Asset Management in London, said Argentina notes already mostly price in a default, considering a historical recovery rate of about 40% in emerging markets plus coupon payments until the event potentially happens.

When Argentina defaulted on $95 billion worth of bonds in 2001, a large majority of holders accepted an exchange for new debt worth about 30 cents on the dollar, according to Alejo Costa, a strategist at BTG Pactual Argentina in Buenos Aires.

The IMF’s stance is likely to be key to any debt restructuring. The fund, which last year granted a $56 billion bailout to the South American country after a slump in the peso, will soon decide whether to disburse about $5 billion of additional funds next month.

My statement on Argentina 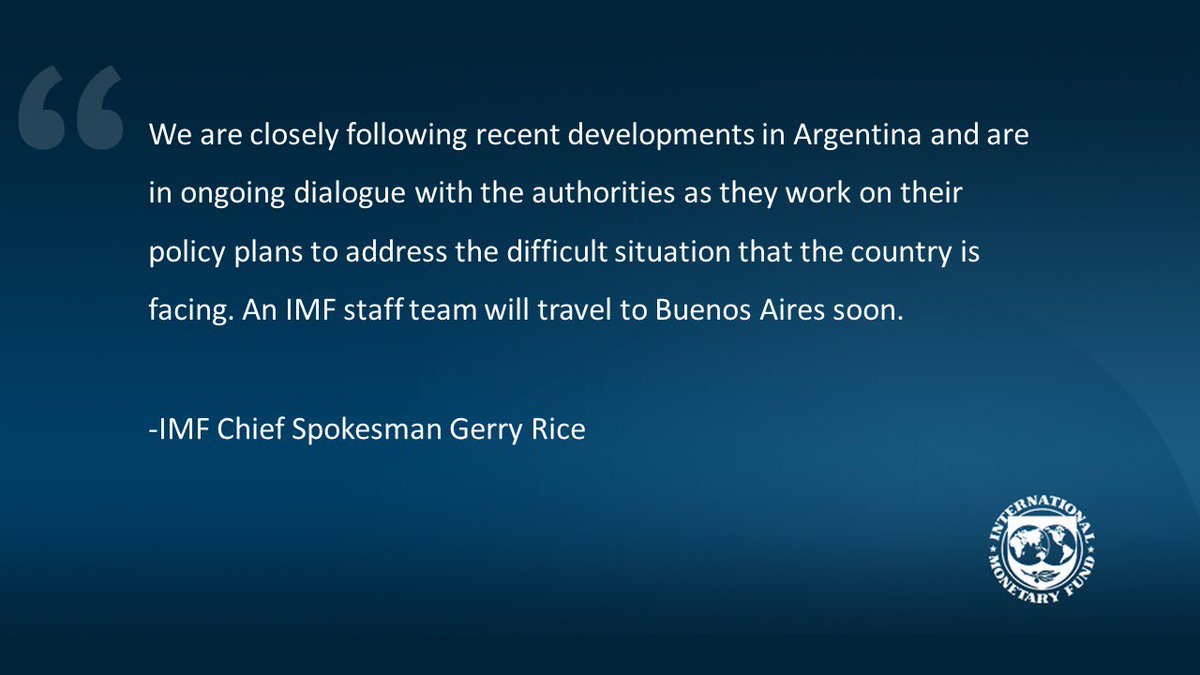 An immediate debt restructuring under the IMF’s guidance would allow Fernandez “to blame Mr. Macri for the unsustainable debt position he inherited,” Edward Glossop, a Latin America economist at Capital Economics Ltd. in London, wrote in a note to clients. “This would result in smoother debt-restructuring talks and higher recovery values on bonds.”

Glossop estimates that under that scenario, which he sees as the most likely, recovery values would be between 50 and 60 cents. But if there’s a breakdown in the IMF deal and the government ends up using foreign reserves to pay near-term debts, he says the peso would likely slump and prompt a disorderly default, which could bring those to between 30 and 40 cents.

Argentina May Rely on Capital Control to Spare Reserves: Amherst

“If the next administration doesn’t manage to have market confidence, funding will be limited and will require a haircut to face obligations,” said Carolina Gialdi, a senior fixed-income strategist at BTG Pactual Argentina in Buenos Aires.

By Aline Oyamada and Sydney Maki