In his recent article "Notes from Accuray Annual Shareholder Meeting (2009)", Matthew Rafat shared with us what happened during that specific event and also gave us a very accurate presentation of Accuray (ARAY), its revolutionary technology and some of the problems surrounding its stock performance.
We invite those who still haven't read the article to go through it, including the comment section.
With our short note, we will only try to add a few considerations, mostly related to the performance of the company in terms of product sales and communication to the market.
A quick look at Accuray's stock price since the IPO (which was made in February 2007, at $18, with the stock jumping around $30 soon after) says a lot about the trend that the shares have experienced recently (chart from Google, click to enlarge):

While it is generally impossible to find a single fact explaining a company's poor performance, we will make an effort to select the few reasons that do represent, in our opinion, the main causes for this continuous slide.
Since its first filings, Accuray has always mentioned the existence of a large backlog. For example, here is what the company wrote in its Form 10-Q for the Quarter Ended December 31, 2006
As of December 31, 2006, our backlog was approximately $327.9 million.
​
Backlog was defined as the sum of two components: deferred revenue and future payments that Accuray's customers were contractually committed to make, but which were not yet received. Basically, backlog included non-contingent contractual commitments from CyberKnife system purchase agreements, service plans and minimum payment requirements associated with Accuray's shared ownership programs.
A large part of it ($193.2 million) was represented, at that time, by CyberKnife system sales, with the rest belonging to the mentioned service plans and shared ownership programs.
Assuming a selling price of about $4 million, and using simple (simplistic?) math, the average investor would have probably speculated that Accuray was holding orders for about 50 CyberKnife systems as of December 2006. If we look at the average product installations in a year, we get to a number closer to 30 per year, in 2006, 2007 and even 2008.
Quite disappointing, given the expectations created by the large backlog number, and the fact that the company claimed new system sales every quarter (a similar comparison could be run for revenues, but we prefer to keep it simple talking about system sales/installations, to avoid revenue recognitions problems caused by different accounting rules used by the company).
To make it even more complicated, in the past Accuray used to report, in addition to non-contingent backlog (i.e. for which all contractual obligations had been satisfied, like the one we just mentioned for December 2006), also what was mentioned as “contingent”. The contingent backlog also contributed to inflating revenue expectations, as this number sounded like “potential CyberKnife sales” just waiting for authorization/financing. This also consisted of several million dollars, each quarter.
Beginning with the first quarter of fiscal 2010 (July-September 2009), Accuray has started reporting only non-contingent orders as backlog, using a refined criteria.
However, while the company had stated in its 4Q 2009 P/R that
Of the contracts signed by June 27, 2009, non-contingent contracts, for which all contractual obligations have been satisfied, accounted for approximately $407 million or 73 percent of total backlog reported for the fourth quarter of fiscal 2009.
​
The same backlog, using a new, more restrictive definition, was quantified in the 1Q 2010 P/R in a completely different way:
Applying these refined criteria to the backlog as of June 30, 2009 would yield a backlog of $282 million.
​
Over $120 million have basically been canceled from backlog due to a different, more selective approach to sales reports.
Unsurprisingly, Accuray is facing a class action alleging that the company misrepresented and failed to disclose material information concerning the quality and realistic likelihood of fulfillment of contracts in Accuray’s “backlog,” a figure representing the direct revenue that Accuray expects to receive from the sale and servicing of the CyberKnife system (more details about the class action are available at this link). Analysts were quite upset with Oppenheimer's Amit Hazan writing “Are You Kidding Me?” as the main headline to comment 1Q 2010 results and the backlog reinstatement, which is about 60% (there are now about 25 CyberKnife systems in the backlog, meaning that the product segment of that backlog was restated down by the new criteria as of 1Q 2010).
The mix of high market expectations (artificially created by the presumption of future system sales justified by the company's inflated backlog comments), coupled with relatively flat sales and the surrounding economy worsening in recent times, may, in our opinion, fully explain why the stock has recently been on a continuous slide, and why there is a general perception that management may be held responsible for the company's weak performance.
Accuray's poor share price can also partially be explained, in 2009, by the decision of one of its largest shareholders, President International Investment Holdings Ltd., to liquidate part of its initial investment (here is its most recent sale), probably to finance other investments in Asia (the company is located in Taiwan). A summary of President International Investment Holdings trading history is available at this link.
Matthew's article also mentioned the accounting reason why the company will keep recognizing some deferred revenues, linked to old contracts written before 2005, over the next two years. Without going too deeply into this accounting matter, we also believe that this change in the way the company recognized revenues made it more difficult for the average investor to track the underlining performance, as it is more complicated to understand Accuray's cash flow dynamics, for example, and comparing revenues between different periods (using different accounting rules) may sound like an apple to orange comparison.
As a further example, future revenue will see a very limited impact from legacy Platinum contracts and may look weak, in comparison, even if the company keeps growing system sales.
For this reason, we suggest simplifying the approach and just look at CyberKnife installations as the only way to track Accuray's performance to understand if an inflection point has been reached by the company.
Here is a simple chart resuming some numbers: 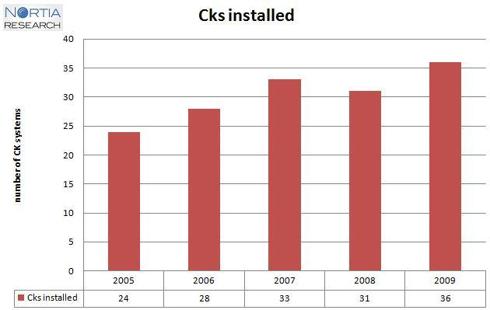 Accuray has basically been selling about 30 systems per year since 2006. In spite of the surrounding weak economy, 2009 was a record year for the company in terms of CyberKnife sales, while 2008 had seen a slight decline compared with 2007.
These basic numbers also explain why the company is not perceived by the stock market as a “growing story” - as flat would probably describe it better, so far. 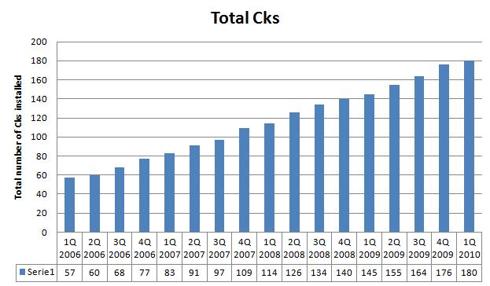 In terms of absolute performance, however, it is interesting that Accuray can now count on 180 CyberKnife systems installed in the world, with new markets recently opened. It is always quite difficult to “break the ice” for a new technology, as shown, for example, by the fact that sales in Canada were possible since August 2006, but just recently the first hospital in Montréal introduced a CyberKnife, with other locations probably following soon (Ottawa and Hamilton, Ontario) .
The more systems installed, the more patients' clinical data Accuray will acquire (essential to prove if the technology is effective compared to today's standards of cure, and further increase demand for new CyberKnife systems). Time should be on the company's side, assuming the technology is really disruptive (big IF, of course).
While management has messed it up with the backlog, we believe that visibility, in this kind of business, is relatively good.
Given the fact that a customer must construct or renovate a facility to house a CyberKnife (as special radiation shielding is required), when you think about it, the company knows reasonably well in advance how many systems will be, most probably, installed in the next few months. Although we understand that slight construction delays might move an installation to a subsequent quarter, we do not think it impossible to give out realist guidance for installations forecasted in the following 6 months, rather than the useless, thus far, backlog revenue numbers.
How can a single shareholder try to keep track of the company's development, absent some help from Accuray itself?
As we may notice from this chart, sales are, in absolute terms, relatively low, with installations going from 3 to 12 per quarter. 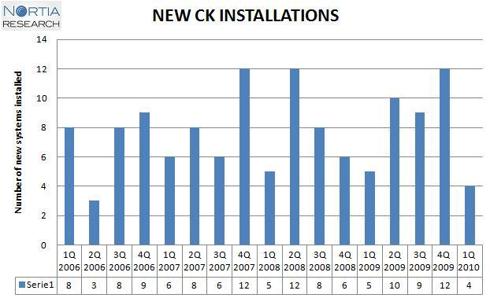 Given the fact that, very often, hospitals or institutions start “advertising” in several ways their intention/decision to install a CyberKnife (because they need to start raising funds or to ask for a permission/certificate of need, or look for the professionals to run the facility, or to promote their presence in advance to the official opening, etc. etc.), it is relatively easy to search the internet and find out about new installations.
For example, yyy60, on the Investor village Message Board, does a fantastic job following and sharing all this information. His posts can be found at this link.
While we know that we haven't covered many interesting aspects of the company (which we might leave for another article), we hope we have pointed out a few facts that most probably caused the recent stock price weak performance: Accuray needs to re-build credibility with the investing community, and, obviously, to accelerate its CyberKnife systems sales trend to reverse its fortune. The company still holds tremendous potential.
To better track future developments, also in terms of markets, here are a few more data about the company's recent performance: 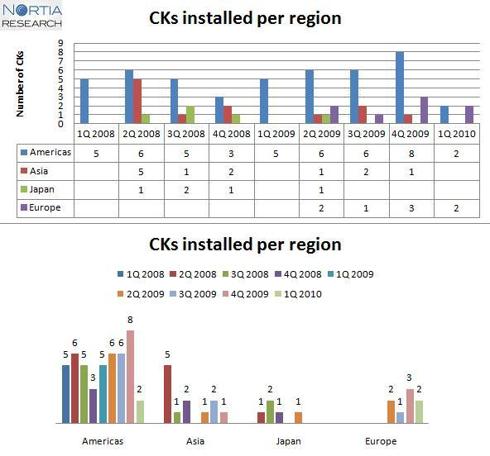 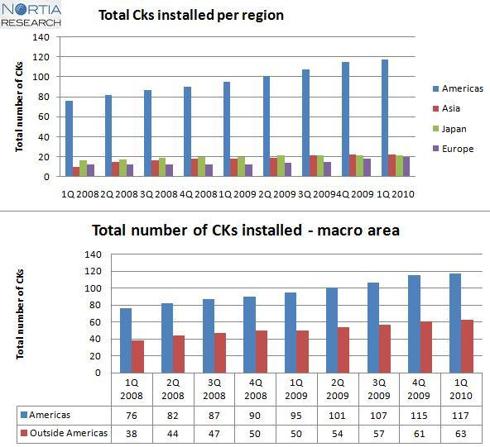