This below is our latest interview with Professor Konstantinos Voudouris from Greece:
1) Prof Voudouris, Greece reported a high primary surplus in 2017 (4,2% of its GDP) and very similar in 2018, too. That’s higher than the 3,5% demanded by European Commission and considered “excessive” by the International Monetary Fund, but also believed too ambitious by commentators and analysts. Anyway, it still posts a little deficit, because of the interest expenditures, although the country benefits of very good conditions from European creditors. Do you think that Athens’ budget is really balanced?
Greece’s creditors swept its default under the carpet, through Greek bonds’ haircut in 2012. The risk of a new devastating default is sleeping, but is here. IMF believes that huge surpluses could make this debt sustainable. But Greece needs a brave haircut of at least 30% so as to be able to pay this ballooning debt. This is the first step. The second is the necessity for higher growth rates that boost economy and inevitably tax revenues and decrease the needs of new loans. But so high surpluses of 3,5% of GDP is a fatal error. 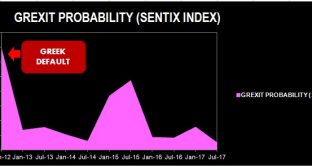 2) In the past days, the German chancellor Angela Merkel visited Athens and she complemented with premier Alexis Tsipras, a fact judged impossibile some time ago, even if she recommended steps forward on structural reforms. How was it possibile such a change from anti-austerity to pro-European stance?

Angela Merkel is out of the scene and lights now, and her support for Tsipras is symbolic. Fiscal austerity in Eurozone is feeding from Euro zone’s bad structure cause it’s a monetary union really based on German mark, not a single currency for all its countries, not an optimal monetary area. Angela Merkel was all these years the mean goddess Ira of austerity (Greek mythology), but the change of the death of Eurozone and generally Europe is ahead.

3) The Parliament majority is splitting in Greece on the deal with Republic of Macedonia about the name of this latter. The junior partner of Syriza, Anel, could leave the government. Will this take to snap elections or some other parties will join the government?

I strongly believe that political mess in Greece is less important. Political analysts estimate that there is the magic number of 151 seats that can ensure Tsipras’ chair. But SYRIZA has no chances of a new win. The hourglass is almost empty.

4) What’s the situation with the national banking system? Are NPLs falling or we can see in the future new restrictions on capital flows again as those in 2015? And the credit to business and families is recovering?

Private debt accompanied with public debt is the main problem of Greece. NPLs act as a brake on new loans and Greek households are overburdened with debt. The banks are reluctant to increase loans supply. Money multiplier is falling that means the money supply is increasing with slower rates. One euro to banks is only 1,46 euro in economy compared to above 2 euros in economy, 7 years before. 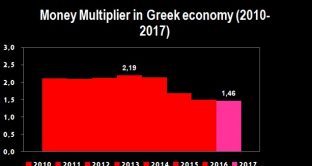 5) If you should describe the economic conditions of your countries, how do you define them? Is Greece really recovering or simply stopping falling more and more?

Well, Greek economy is a patient that is recovering after a heavy heart-attack. It is not still healthy. But the doctor is hooked on the wrong drug that does not help the patient to recover more rapidly.

6) The numbers about trade balance in Greece still seem to be a desaster. The country exports circa 12% of GDP less than its imports. That means that competitiveness is nowhere next to reach. What’s the problem with that? Domestic aggregate demand or an exchange rate (still) too high? 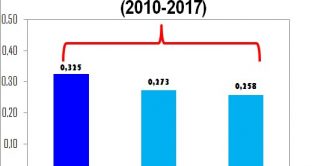 7) Greece is approaching to the European and new political elections with a falling and low support for the (one time?) anti-establishment and anti-austerity party, in contrast to the other countries, above all Italy, where “populist” and “souveranists” are gaining more and more consensus among the citizens. The conservative and pro-UE conservative party, New Democracy, is given not less than 10 percentage points ahead. What’s the deep message that Greek citizens are sending after the electoral uprising of 4 years ago?
New Democracy has maintained its election power at about 30% and has gained from the crash of Independent Greeks, the far right party and co-governor of SYRIZA. It also gains as the main promise is that Mitsotakis will cut off the tax rates. This is the key that brings new voters to this conservative party. Tsipras party lost many parliamentary representatives all these years and many voters are disappointed.
8) Greeks complain they made high sacrifies to balance the budget, but the pensions expenditures to GDP remain more or less the same after a douzen of reforms and cuts. Do you believe that other measures will come on this issue? What will be the main policy of a likely New Democracy government?
Pensions rate as percentage of GDP remains high after all these cuts because GDP was smashed and the country is ageing. Young people migrate and pensioners number raises. I believe that Mitsotakis has no margins to cut pensions, but he will cut other government expenses. We saw Manovra that raised low pensions from 500 euros to 780 euros. Salvinomics are here. Most Greek pensioners live under the poverty line.

Pensions’ expenditure curve looks like a walking stick : In high levels expenditure harms economy but now the level is helpful for economy due to multiplier. 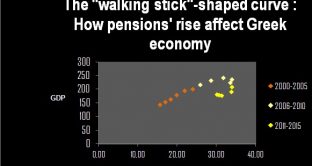 9) Grexit risk seem to be over, but the future for the country’s economy tends to be darkened by the debt burden and the weakness of the macro indicators. How do you judge the Tsipras’ legacy? Do you think that Athens’ Treasury will be able to refinance itself on the markets without an external backstop?
This is a big bet : There is a pillow of 20 bln that allows the country to refinance its needs for almost two years. Personally I expect a rise in rates in Eurozone too after the Fed decisions and i think this could raise the bond yields. But Greece is still in the tunnel and out of the markets. Two thirds of debt are not in stable interest rates and I am worried about the debt.
10) Indicate the main measures you would adopt if you were at government now, in order to make the economy really recover.

Three first simple measures. The one is slashing tax rates. Tax rate in corporate tax tomorrow at 22% and VAT tax rates, four units down. This could raise tax revenues and the explanation is Laffer curve. It can also boost consumption and hurt unemployment and have a positive impact on private investment. The second step is brave employment subsidies to firms so as to kill the monster of unemployment that stands at almost 19%. We can find the money from tax rates reduction that can increase tax revenues. And thirdly the most necessary step : Renegotiation with the lenders the huge surpluses and a real debt relief.  Because huge surpluses don’t let any air in fiscal room, smothering economy.